Where is the Bride?

I had a dream last night.  Different. Timely. Painful.

It was a wedding.  It was a small gathering of just friends.  And yet, I didn’t even know who the bride was.

There were two bridesmaids and they had on white gowns.  I did not know them – but they appeared to know me.  One grabs me by my arm and says, “Come up to the altar with us – you are her friend too!”

I go up there and I am thinking that I have to find a way to get off the platform.  I wasn’t even dressed for a wedding.  I was wearing an orange blouse and jeans.

The wedding was set up to be outside.  And then it started raining.

The church sanctuary couldn’t be used because it was already cleaned up for Sunday.  So it must have been a Saturday wedding.

As I am running to get out of the rain, I fall down and twist my ankle.  No one stops to help me – so I was a muddy mess trying to get to shelter.

People started gathering in a room in church – a small setting and the crowd was getting larger.  So, it was decided to move again – so it was moved to a movie theatre. Apparently, after the wedding, people were invited to see a movie afterward.

Once again, the crowd was increasing and there was no longer room enough for the people.  So, it was moved again.

It had stopped raining so it was moved back outside. At this setting, it was hard to find a place to sit or even stand to be able to see the ceremony.  The crowd was beginning to get loud and cranky.   Not only that, but where was the bride?

Someone makes a decision to have an “ice breaker.”  I was given two strips of paper.  On one strip the number “0” was written and on the other strip of paper the name “Rosa Parks” was written.  People were already beginning to find the person written on their strips of paper.  I didn’t even know where to start.

I started roaming around trying to find a single person by themselves.  There were just large groups of people talking.  The atmosphere was changing quickly to anger.  Where was Rosa?  All of a sudden I stop and say, “Wait!  Wait a minute!  Rosa Parks?  She is dead!”

Why was I given a name of a person that wasn’t even attending the wedding?  Why did I have the number “0”?

Rosa Parks was a black woman who was tired one day back in the 50’s and sat down on the bus to go home.  A white man comes up to her and asked her to get up and she refused.  The rest is history!  Because of her, there was a transit boycott in Alabama for 381-days!  Through this one step, Rosa changed history! 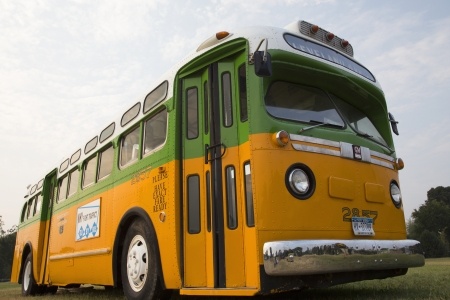 I wake up!  What was that all about?  My ankle was also hurting – like I had twisted it.

How do I interpret this dream?

I have an idea about parts of this dreams and others I am not sure.

I will give interpretations in my next blog!