Spinning My Life Away

As I woke up this morning, I had a vision of spinning tops.  I thought that was a little strange.  But God uses ordinary things sometimes to teach us great things. 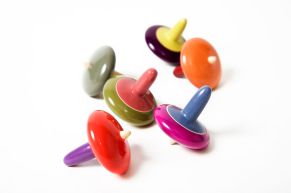 I have been burdened lately with how many lives are spinning out of control.  I have spent a lot of time in prayer asking the Father to show me how to speak out against this control.  I don’t want to control.  I want others to have freedom.  But I also know that without some rules being followed, no one gets to spin freely.

Controlling is a big issue.  I have seen it throughout this week on National News.  Adults spinning around knocking over others – trying to keep them silenced – trying to take another’s space and keep them from moving about.

As I was thinking during my quiet time, I tried to think of a time where I have seen lots of spinning toys spinning in the same space at the same time.  It just doesn’t work.  As I am looking for images to use with my article, I discovered something unique that I didn’t know before.  Have you ever heard of a Dreidel?

A Dreidel is a spinning toy.  But during a difficult period of history, it was used to teach children.  Instead of me trying to explain it, I am posting from a website that I have used for information before:

“It is told that the dreidel, known in Hebrew as a sevivon, dates back to the time of the Greek-Syrian rule over the Holy Land—which set off the Maccabean revolt that culminated in the Chanukah miracle. Learning Torah was outlawed by the enemy, a “crime” punishable by death. The Jewish children resorted to hiding in caves in order to study. If a Greek patrol would approach, the children would pull out their tops and pretend to be playing a game.” (www.Chabad.org)

IF we don’t stop and truly think about what is spinning out of control around us, no one will be able to move about freely.  I am not going to take this topic any further today, but I would ask you to stop and think – search – then be creative.  How can we help one another to have the opportunity to spin and not be knocked over every time we move?

My Song:  We control for many reasons.  My life works best when I allow God the control over my life.  Yes, every once in awhile, I feel the need to control, but I am learning how to stop and think first.  I pray this song blesses you today.